In the shop you can personalize your character.

You are in a waiting room. The battle will start automatically.
To play alone, try out our new Survival mode.

Fight with monsters. When you feel ready, join other players.

JOIN OTHER PLAYERS
-
+-
-
0
0
Invite
Click on the button below to get a shareable link so your friends can join your game.
COPY LINK
New game

Sign in to earn coins and
unlock new skins.

Blow up all your enemies. Avoid explosions and monsters. Be the last man standing. 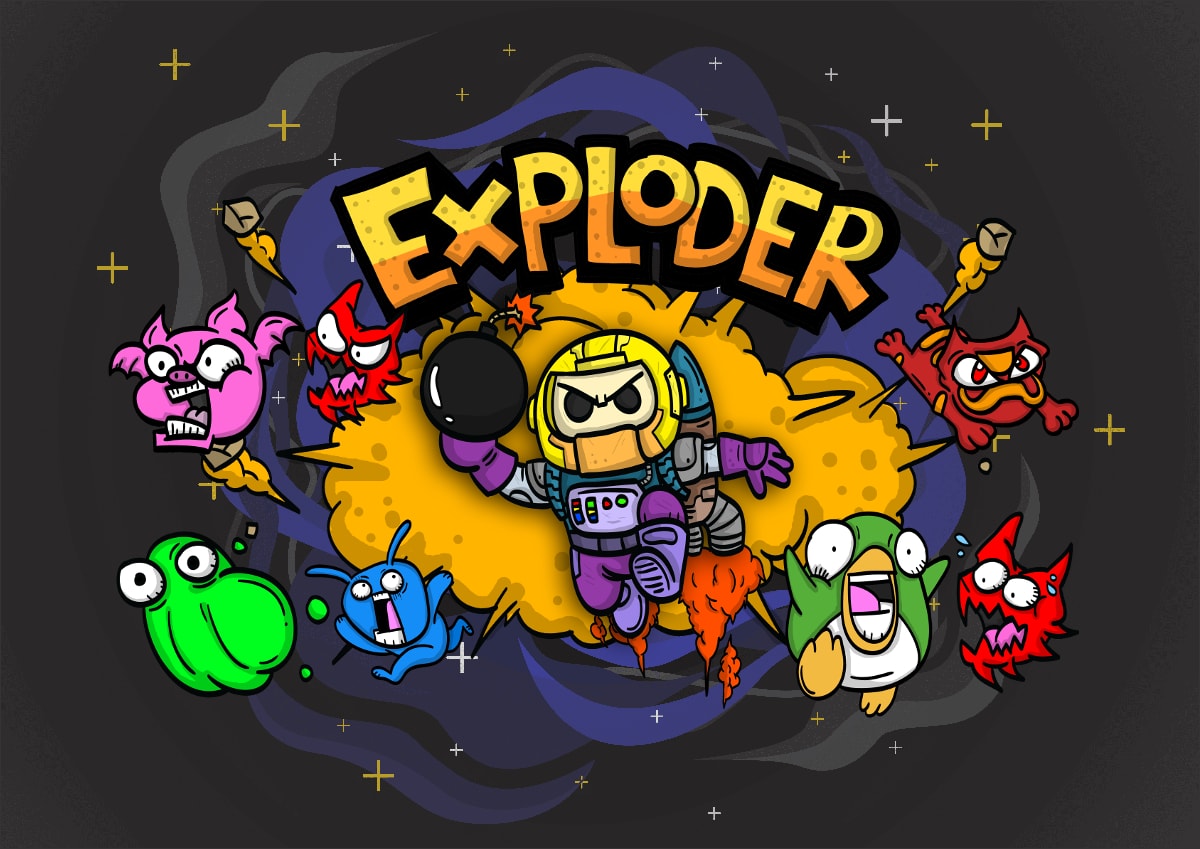 A gridlike maze. Obstacles. And bombs… lots of bombs.

These are the basic elements of a classic game genre that stretches all the way back to the 1980's. It started as a silly little demo for Hudson Soft's BASIC compiler. After stealth releases to the Japanese and European PC markets were a success, Bomberman was released for the NES. And the rest was history.

Since then, we learned that setting off bombs in a maze can be incredibly dangerous. So of course there needed to be multiplayer versions that let you blow up your friends! At first, this was done locally with multiple controllers, but these days there are quite a few ways to play Bomberman online.

Lots of Bomberman clones strayed significantly from the basic concept… to mixed results. Fancy graphics did nothing to improve the original formula. ‘3D' versions were often mind numbingly boring, offering way too many ways to escape a deadly explosion. And fusions with other games didn't increase the nostalgia hit at all.

Exploder has entered the arena

So we released one of the most recent .io games online, in order to erase the sins of our spiritual cousins. Exploder is our attempt to return to the genre's roots, all while leveraging modern net code and the power of browser based gaming (though there's a downloadable version for those who want the most streamlined experience possible).

We had a classic take on what had to be part of the game: Move through a maze, plant bombs, avoid monsters, avoid other players' explosions, collect power ups, hunt your prey down. And win.

That's not to say there's no room for innovation! We implemented a larger variety of maze monsters, attractive player skins, and customizable explosion graphics as part of this new package. But importantly, none of this betrays the spirit of the original. It feels like what a pseudo Bomberman online experience should be like.

In fact, that feeling was a cornerstone of the development process.

"Imagine If You Could Play Bomberman Online…"

That phrase was tattooed on the inside of the Exploder dev team's mind whenever we lovingly etched a new line of code. The experience needed to be pristine, so that new players immediately understood what they had stumbled across. It needed to be more challenging than your average Bomberman online experience while remaining intuitive. We knew that this was going to be built for gamers, ranging from casual to highly competitive.

Walking the line between loyalty to an immortal genre and creating a highly entertaining gaming experience is tough. But our team managed it, after months of effort and many sleepless nights tweaking the code to be just right.

As with many passionate development teams, we express our love of the game with frequent, comprehensive releases. We're just as addicted to making the game as we are to playing it.

It's also a hallmark of the platform we've chosen. In the world of .io games online, if you slack, you quickly become irrelevant.

We learned that if you want to release a game on the IO domain (standing for the British Indian Ocean Territory, a very special country code among hundreds of more forgettable ones), comparisons are inevitably going to be drawn. Popular .io games online include powerhouses like Slither and Diep, titles that can suck away a hundred hours of your life before you know it.

So we had to ask ourselves: Is there room for a title like ours in the world of .io games online? We think there is, as long as we focus on an important aspect of Exploder:

A common thread in this genre of games is the ‘minute to learn, lifetime to master' philosophy. No matter how simple Exploder looks, there are layers upon layers of nuance. Things like timing, feints, predicting the AI, providing effective counterplay against more juiced up opponents, and calculated risks all enter the picture. No two games are alike.

Sound familiar? Those subtle complexities are at the heart of many of the most popular browser based games. But our devs have a second weapon in their back pocket, and it's one that not a lot of .io games online fully latch on to: Nostalgia.

Our game is backed by the spirit of over thirty-five years of mazes and bombs, stretching back to the NES/Famicom days. Unlike many of the pretenders to the Bomberman throne, we've stayed loyal: A pixel-art style that resonates with fans, simple rules that allow players to get involved from game number one, a highly readable interface, and attractive 2D graphics.

We're looking at many different audiences: Groups of friends who want to have an explosive little online ‘survival of the fittest' experience. Solo players who are just kicking back and whiling away the time. Competitive players who measure every pixel and animation frame. And older gamers who can't help but break into a broad smile when those 80's vibes hit.

To this end, there's two game modes. Standard mode is multiplayer against randoms; you against the world. Friends mode allows for the creation and joining of lobbies. This will give you and your buddies a private sandbox for your own Exploder games. Or, dare I presume, a mechanic for organized tournaments? Stay tuned.

You no longer have to imagine your next generation Bomberman online experience. We created it for you.

Exploder hits all of the sweet spots. It can have you laughing out loud at an accidentally suicidal bomb run. Or it can have you right at the edge of your seat, trying to squeeze every advantage out of that last power up before it expires. We believe it has succeeded at both the ‘nostalgia' and the ‘depth' tests.

There is a niche for reimagined games that stay faithful to the spirit of the original. Exploder fits beautifully into that niche. And if we're taking bets, we think it will find the right audience in short order.

You have successfully bought a new item in the shop. Check your inventory!

Social media links are displayed in the Leaderboard

or go back to the main menu.